If you’re like most therapists, you rely on talk therapy or a technical modality such as EMDR or Somatic Experiencing. What you are missing is the brain-body relation. 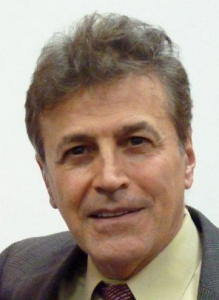 Brainspotting is a new brain-based relational treatment approach developed by David Grand, PhD. that will give you more effectiveness as a therapist and avoid poor client responses. Join Dr. Grand via live webcast on October 2 as he explains this exciting new modality.

Brainspotting is a powerful, focused treatment method that works by identifying, processing and releasing core neurophysiological sources of emotional/body pain, trauma, dissociation and a variety of challenging symptoms.

Trauma overwhelms the brain’s processing, leaving pieces of unprocessed experiences frozen in time. Brainspotting will provide you with powerful tools enabling your clients to quickly and effectively focus and process through the deep brain sources of many emotional, somatic and performance problems.

Where we look reveals critical information about what is going on in our brain. By carefully observing how and where clients look and focusing on the particular spot, this helps the client process disturbing material more gently and deeply.

Why is it better than many approaches?

Reserve your seat today at this rare event with Dr. David Grand!

Follow this link for registration details and enter the code SPOTDG to receive a $25 discount.

“Let’s start at the very beginning, a very good place to start. When you read you begin with A,B,C. “ (singing from Sound of Music…).

When you spot you begin with three pillars: gazespotting, inside and outside window spotting. Everything else gets built from this. There is evolution in most types of treatment (at least we hope there is). This is true with brainspotting. There are wording changes. For example, we used to call a brainspot a “distress spot,” then an “activation spot,” and now David Grand sometimes calls it “the access spot.” Activation at the spot gives us access to what we want to work on. There are logistical and organizational changes in brainspotting as well.

There’s more articulation of activation and resource models. Activation is where the client holds activation in the body and finds the brainspot that matches that activation. The activation model is actually considered a resource model because it is done with relational attunement. One way to Resource is to find a body resource spot which is paired with the resource eye. However, most can handle more activation than we may believe, and when the process plateaus, that’s where the healing can happen.

There is more emphasis on the brain based model as we learn more. (My brain model Alaine brain was introduced). Brainspotting appears to access the sub- cortex including the right brain, limbic system, and the brainstem. According to Corrigan and Grand, brainspotting is a neurological resource as it provides an attuned, focused, framed, accessing anchor to the midbrain and is grounded in the body. The sub-cortex is much faster than the neo-cortex, which is so complex, it sacrifices speed for higher performance. Brainspotting >> sub-cortex. Therapists intervening >> neo-cortex!

There is more talk about neuroplasticity (Norman Doidge) and how it applies to Brainspotting and healing. “Neurons that fire together, wire together.” (Donald Hebb)

The trauma capsule theory was developed by Dr. Robert Scaer. It’s also known as the dissociative capsule. Trauma can overwhelm the brain’s processing which leaves pieces of the unprocessed experience frozen in time or space (or even lost).

Unprocessed traumas are held in capsule form in the brain. A brainspot is believed to be an eye position that correlates with a physiological capsule that holds the traumatic experience in memory form. Corrigan talks about visual fields, and how visual information gets direct access to the midbrain. We appear to use orienting mechanisms in the brain to find the trauma capsules. Brainspotting turns the brain’s search/scan system back on its self to locate the trauma. Dr. Grand theorizes that brainspotting taps into and harnesses the brain/body self scanning to locate, hold in place, process and release focused areas that are in a maladaptive homeostasis i.e. frozen in primitive survival mode. Dr. Grand continues to emphasize less talking and intervention. “Less equals more.” There is more emphasis on the Uncertainty principle by Heisenberg. We are sitting with the client in a state of uncertainty 100% of the time. We’re in trouble when we think we know. David talks about wait, wait, and wait some more when wanting to intervene. You can’t heal the sub-cortical with neo-cortical intervention. It goes back to the idea of following the client. We are the tail of the comet following the head (client) when working in treatment.

Brainspotting constructs a frame around the client, relationally and neurobiologically. This is the definition of dual attunement. With the resource model, the therapist makes the container smaller temporarily. The frame holds the client and focuses them. It enables them to go into a state of optimal processing. However, therapists may jump in too quickly with resources, including with clients who suffer from very complex PTSD.

David Grand has expanded on the window of tolerance concept. (see John Briere and Dan Siegal)

Extremely Complex PTSD (DID and severe attachment disorders) is outside the window of tolerance and requires both a modified and expanded BSP resource model. The attuned presence of the therapist is the core of the advanced resource model, according to Dr. Grand.

Dr. Grand’s third day of his phase one training is focused on working with severe attachment disorders and Dissociative Identity Disorder (DID).

Subcortical countertransference can be induced in the therapist by exposure to the client’s severe trauma material. This may activate the therapist’s own trauma triggers. The therapist may experience flight, flight, or freeze reactions. Flight is our impulse to create distance from the client. Freeze can be the dorsal vagal collapse or the therapist’s extreme sense of somatic helplessness and inability to think. Fight is the therapist’s vulnerability to struggle with the client especially, with aggressive altars. A triggered therapist is likely to intervene too quickly and too frequently. Dr Grand stated that the key piece is to know it, be aware, and not overcompensate out of anxiety. For the therapist to sit in a tuned, empathic presence is the ultimate antidote!

Many DID clients can be trapped in a 24 hour flashback which is usually somatic. These clients typically have little capacity to sleep. One of the first, primary goals is to establish reestablish sleep and establish islands where there are no flashbacks.

The most powerful brainspot for clients with DID is the eye contact spot. This can be the ultimate healing aspect of the attuned presence. It is done spontaneously and in silence. It is important to be mindful of how and when your client is looking at you, and when they do, engage back with them. Let them choose what’s comfortable -for example how close or how far away.

A client in flashback will often look off in a particular direction when they go into flashback. Point this out to them. For example, I see you were looking in such and such a direction. Is it okay if I position myself there? Look right at their face. You want them to see you. When you’re in their flashback, they can begin to feel you there, and see that they are not alone. It can help them to see somebody who’s not the perpetrator. Aligning our face where the client gazes can help imprint a new image onto the flashback.

Most of this new material on Brainspotting can be found in David Grand’s new three day level 1 Brainspotting training if you are interested!

This material was originally presented in a RMBI brown bag lunch seminar earlier in 2015.

Dr Faith Cohen will be speaking about Kids and BSP at the upcoming Brown Bag Lunch on March 22, 2012!

The Rocky Mountain Brainspotting Institute (RMBI) is a nonprofit 501(c)(3) organization that was created to promote and advance the use of Brainspotting, an emerging new treatment in psychotherapy.